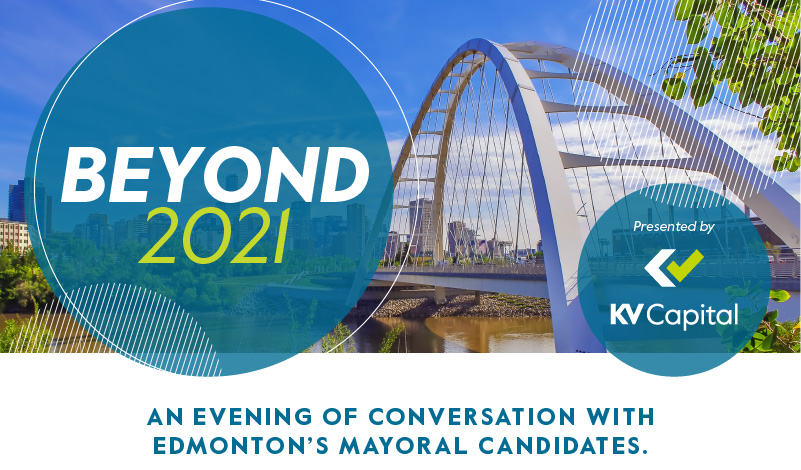 KV Capital is proud to present: BEYOND2021

We are pleased to invite you to join us for an exclusive invite-only event with select 2021 Edmonton mayoral candidates and a networking reception to follow.

Invitees may elect to attend the event in-person or virtually by indicating their preference on our event registration form.

Learn about the upcoming changes to Edmonton’s council framework & how candidates are proposing to drive a more agile + prosperous economy that meets the needs of its citizens in an equitable way, while enjoying a long-awaited opportunity to connect in person with like-minded business professionals. 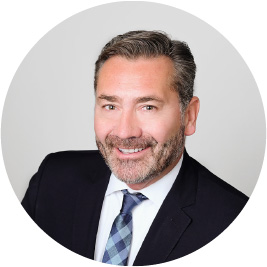 Serving at senior executive levels in both private and public sectors, Jeffrey has significant experience in economic development, trade, international diplomacy, corporate strategy, acquisitions, finance, and higher education. He has worked internationally throughout his professional career, conducting business in Europe, the Middle East, North Africa, Asia and the United States.

Jeffrey previously served as Chief Executive Officer of EDC Environmental Group of Companies, the parent investment company of environmental services companies in Canada and the United States treating industrial wastewater and contaminated soil. Before that, as the senior diplomat appointed to the High Commission of Canada in London, he represented Alberta’s policy, trade, investment and reputational interests in Europe.

Jeffrey has served on a number of Chamber board and policy committees, most recently as the Board Vice Chair. He also serves on the Boards of Edmonton Global, EDC Environmental Group, is an advisor to the Canada UK Chamber of Commerce, and served as Chair of the Greater Edmonton Region Chambers of Commerce.
‍ 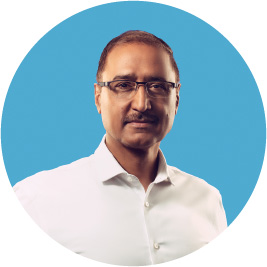 Amarjeet Sohi is running to be mayor of Edmonton. If you ask him, he’ll say he owes his success to the services and communities of the city that supported him since he moved here when he was 18 years old. When he arrived in Canada, Amarjeet started working as a taxi driver, and eventually moved on to driving buses for the Edmonton Transit System. While working at ETS, Amarjeet became involved in his local union, advocating on behalf of his fellow members.

In 2004, Amarjeet turned his attention to civic politics, when he ran for City Council. He was unsuccessful in his first campaign, but in 2007, he was elected as the councillor for Ward 6. He served on Council for eight years.

In 2015, Amarjeet was elected as the Member of Parliament for Edmonton Mill Woods. When he arrived in Ottawa, he was appointed to cabinet as the Minister of Infrastructure and Communities. In 2018, he was named the Minister of Natural Resources. In Ottawa, Amarjeet advocated on behalf of Alberta overseeing billions in infrastructure investments, helping the federal government to acquire the Trans Mountain Pipeline, and advocating for the clean-up of abandoned wells across the province.

In 2019, Amarjeet returned to civilian life and lives in southeast Edmonton with his wife Sarbjeet and daughter Seerat. He’s currently teaching collaborative and inclusive leadership at MacEwan University and spending all of his free time on the campaign trail.
‍ 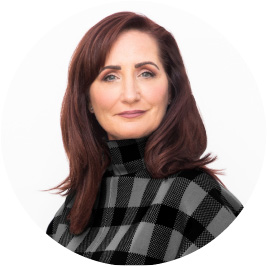 Cheryll is a business executive who brings 20 years of experience in strategic business transformation, technology and innovation -- in both the private and public sectors. Her early background in technology was born at IBM in the late 1990’s. She went on to spend 15 years with Silicon Valley based Intuit, a Fortune 500 firm. Intuit’s relentless focus on the customer and their commitment to developing world class leaders was the perfect place for her to gain the skills and practices that will be required to build a city that works and puts Edmontonians first.

Most recently, Cheryll has been leading growth in the economic and innovation ecosystems of Edmonton and Alberta. Recognizing the need to catalyze our future economy, she joined the Edmonton Economic Development Corporation and founded Innovate Edmonton. Working to create within it a focus on collaborating to create the best possible environment for technology innovation and for our startup companies to grow and scale. She is currently serving as the Co-Chair of the Startup Genome Global Senior Policymaker Forum, a group of innovation ecosystem experts from around the world.

Cheryll is committed to evolving the local tech and innovation ecosystem. She has served her
community in several key roles, most notably as:

- Co-founder and co-chair of the Alberta Innovation Corridor Partnership
- Founding Steering Committee member for the Edmonton Regional Innovation Network
- Member of the Business Council of Alberta’s Tech, Innovation and Telecom Sector Advisory Board, providing advice and policy recommendations to the Alberta Premier’s office

She is also a mentor in the Threshold Impact Venture Mentor Program and in the past served on the boards of the Zebra Child Protection Centre and the Edmonton Arts Council.
‍ 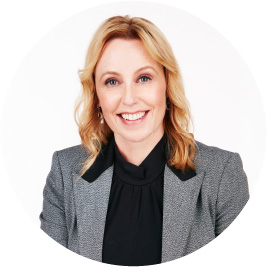 After nearly 20 years in public service, Kim launched her career in the private sector in 2014, building two tech firms from the ground up. Kim’s time in small business has given her first-hand exposure to the challenges faced by Edmonton’s job creators.

First elected in 2004, Kim served as a city councillor for the people of Ward Anirniq (formerly Ward 2) for three terms, working with her constituents to address their concerns — whether it was about potholes, public safety, or building a new community rec centre, Kim was a councillor who got things done.

Before running for office, Kim spent nearly a decade as an Executive Assistant to former councillor Larry Langley. This experience navigating our city’s administration and solving problems for residents allowed her to hit the ground running as an elected official.

Kim’s council record speaks for itself. On everything from Edmonton’s trolley bus system, to the municipal airport, to ICE District, to neighbourhood renewal, Kim’s approach to policy and decision-making is one based in data and facts. She will take a strong stance on important issues — even an unpopular one — but she’s also prepared to change her mind if new information becomes available.

Kim has a legacy of combining mentorship and support for youth-driven initiatives with helping vulnerable Edmonton residents. Kim is particularly proud of her work with the city’s Youth Council in partnership with Boyle Street on Heart 2 Art, a homelessness education campaign that empowered young Edmonton artists and raised awareness and funds in support of Edmonton’s homeless community.
‍ 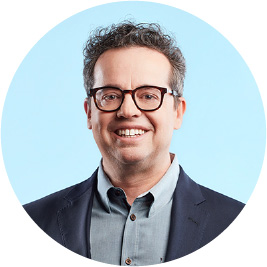 Michael's family moved to Canada and settled in Edmonton when he was seven. This city has been home for him ever since, and he's always wanted to give back to a community that has given him so much. After more than 20 years building and leading enterprises, he knows what it takes to run an organization, drive an economy, and rally a team towards big goals. He knows the importance of building genuine, respectful relationships, setting priorities and being accountable. He knows City Hall from the inside - after four years as a Councillor - and the outside, as a business leader and member of the Community.

He has spent most of his life as a businessperson and entrepreneur, building businesses small and large. One of his first ventures was starting local institution Remedy Café, with the idea of creating a cafe that could serve as a community meeting space. In 1998, he co-founded the financial technology company now known as FIRMA Foreign Exchange. Today, FIRMA has global reach, employing 200 people, and operating offices in four countries, and an Edmonton head office. It has repeatedly been recognized as one of Canada’s Top 50 Best Managed Companies by the accounting firm Deloitte and one of Canada’s Best Employers. As the co-founder, he was also a winner of Ernst & Young’s Entrepreneur of the Year Award.

Recently, Michael founded Blue Pen Capital, which assists access to capital for infill developers. He has contributed to the Edmonton community through public service and volunteer work including previously serving on Edmonton City Council as the Councillor for sipiwiyiniwak (formerly known as Ward 5). While on Council, he spearheaded various initiatives, including Edmonton Made - an initiative to encourage Edmontonians to shop local, the OpenWindow program to streamline customer service for small businesses seeking permits from the City, and the Program and Service Review, a focused effort to find savings and efficiencies across all areas of city government. As a volunteer, he has coached hockey and he currently serves on the boards of the University Hospital Foundation and Business Link as well as mentors businesspeople and their startups through the U of A’s Venture Mentoring Services.

Along with Alissia, his partner of over 25 years, he has two children, Jacob and Isabel who are both currently students in university, and a large, adorable dog named Brix.
‍

Our team is committed to organizing a safe event to ensure the health of all attendees. If you have questions relating to COVID-19 protocol, please email marketing@kvcapital.ca for details.

The following baseline standards will be in place on event day at the JW Marriott Edmonton ICE District and these measures will be updated as new information becomes available:

- Sanitizer at all touch points
- All food will be served from behind plexi stations
- Regular cleaning and sanitizing of washrooms and other public areas (elevators, railings, handles, etc.)
- Staff will continue to undergo start of shift temperature checks and be symptom free prior to coming to work